#1 – “GAME ON” – what better Canadian term from our hockey loving family “Game On”? Ice hockey – road hockey – or golf – the game is on so have fun and enjoy! A par four dogleg right. Don’t be over the back or you’ll be on the road and OB for sure. 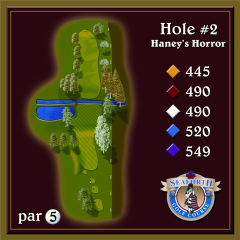 #2 – ” HANEY’S HORROR” – anyone familiar with the OB all the way down the right hand side can appreciate the “horror” element on this hole – but you should also know that the next door farmer’s family name is Haney. I am sure they get more balls to the acre than crop! Richard and Kevin Haney were both junior members here and they never had to buy golf balls! Now their mom has taken up the game too! Remember Mr. Haney on Green Acres? Well if you get away without losing a ball on Haney’s Horror it will be your lucky day! A testing par five with lots of trouble facing the tee shot it’s the #1 handicap hole on the course!

#3 – “HEEDIN IN” – Scots for heading in – and you’re on your way into the sugar bush for some interesting holes. This par four narrows as it approaches the green. Better to be short than long on this hole. 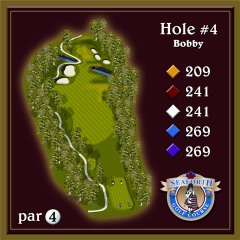 #4 – “BOBBY” – I named this hole after my hero. You figure out who the #4 stands for. This pretty little par four has a small green and very small landing area. The creek in front of the green and bunkers around it will make you think twice before going for it. It’s all about risk and reward! 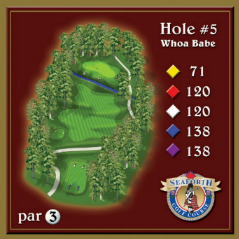 #5 – “WHOA BABE” – There is a bit of history to this name. When you come off the back of #4 green you’ll see a sign at the top of the hill going down into the old gravel pit. It warns cart drivers to slow down with the words, “Whoa Babe.” However the story is many years old. It goes back to when Grandpa Paul Doig worked the gravel pit with a team of horses, one of which was named Babe. During one of his gravel hauling sessions a couple of youngsters hid in the trees and shot their pellet guns at the steel gravel crushers in an attempt to rattle the horses. They were successful and the ricocheting pellets pinged off the steel causing the horses to snort and whinny and pull at the reins. Grandpa was none too pleased and with his gruff voice tried to settle the horses saying, “Whoa Babe!” He would just get them settled when another pellet would cause further commotion. The comments he was yelling at the youngsters hiding in the trees are not printable on this website, but he was a man of colourful language for sure. Grandpa must have used, “Whoa Babe” several times to settle the horses and never did find out who was shooting the gun….that is until several years later when he was playing pool in the local pool hall against one of the young hustlers in town. As one of Grandpa’s pool balls headed to the end pocket the young hustler made the mistake of saying, “Whoa Babe!” Grandpa knew immediately who had been hiding in the trees and promptly broke the pool cue over the young hustler’s arm! This little par three has lots of optional tees for various skill levels but in all cases you’ll have to deal with that same little creek that meanders through the sugar bush. 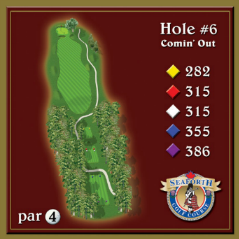 #6 – “COMIN’ OOT” – you have just finished playing two lovely little holes in the sugar bush and now your tee shot on # 6 will bring you back out of the woods and into the open. This hole has its challenges around the green that is sheltered by a grass bunker on the left and a beautiful maple tree on the right. 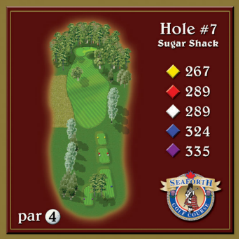 #7 – “SUGAR SHACK” – While the golf course was the family farm and long after the course opened in 1960, the old sugar shack was still in operation. Our family tapped the trees and made excellent maple syrup for many years. The trails through the sugar bush were used by hikers including girl guides and boy scouts who trekked from town to Doig’s bush to see the syrup being made in March and the trilliums, dog tooth violets, and jack in the pulpits in May. The sugar shack is gone except for a drawing upstairs in the lobby, but the memories are still with many in the area and now the sugar bush is enjoyed by golfers from all over the world. This hole has a big swale right in front of the green so it’s easy to be a bit short on the approach 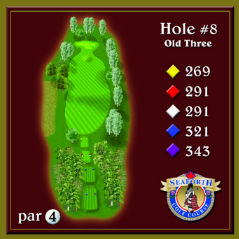 #8 – “OLD THREE” – and I mean OLD, OLD #3! This hole was number 3 and then number 6 and now it’s number 8. Depending on how long you’d been playing the course you’d be calling it some other number and no one ever knew what hole the player really meant. So we gave it its original name back. So even though you’re on #8, it will be called “Old Three”. A straight forward par four with not a lot of trouble, but a very tricky green 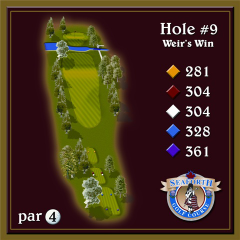 #9 – “WEIR’S WIN” – In 1983 a youngster from Bright’s Grove was encouraged by his golf teacher, Steve Bennett, a Seaforth native, to enter the Seaforth Junior Invitational. This event was always regarded highly and the trophy that had been donated by Gord Sallows in 1971 was coveted by many young golfers in the area. That year the 13 year old youngster bested the entire field to win his first golf tournament ever. Mike Weir has gone on to become one of Canada’s most esteemed professional golfers highlighted by his 2003 Masters victory. Mike remembers his Seaforth victory and his finish, on what is now our 9th green, with fondness. We’re happy to remember this champion’s winning start right here in Seaforth. This par four looks great from the tee. Hit it straight and you’ll be able to make a short pitch over the creek and onto the sloping green. Two putts and you’re off to the clubhouse for a quick bite before making the turn. 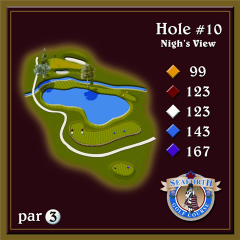 #10 – “NIGH’S VIEW” – The 10th hole is situated on the bend along the road right across from the family farm of Frank and Leona Nigh. Since the golf course’s beginnings in the early 60’s the Nighs not only have been great neighbours but have also provided us with a great work force and great members over the years. Brian and Al worked here as youngsters and now their kids are members of the club and staff. We now have three generations of the Nigh family playing the course regularly although we usually only see Frank out with the grand children once a year. The Nighs have a great view of the revamped 10th with only the old pear tree remaining constant throughout the hole’s evolution. This is a tough par three – it even looks tough. 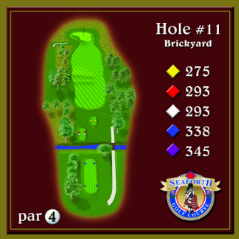 #11 – “BRICKYARD” – Years ago where the red staked hazard is on the left, was a clay pit that was used to extract material for building bricks. A good number of people were employed doing the work that was long forgotten until stone picking turned into brick picking when the 11th and 12th holes were constructed several years ago. One of the most straightforward holes on the course – there is no trouble unless the tee shot is not straight! 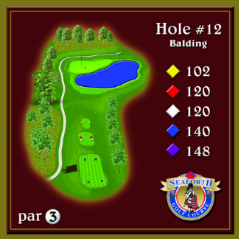 #12 – “BALDING” – We have long called Ken Doig Sr. “Balding” after he gained this name from a golf reporter many years ago in an interview where Dad was referred to as “The Balding Veteran”. Even though now he’s the “bald” veteran, the name stuck. In Balding’s long and illustrious amateur golf career he has only scored a single hole in one and that was on our 12th hole. He wore #12 as a Seaforth Beaver the record breaking Intermediate B hockey team in the 60’s and now he and Mom are making their home beside the 12th green. We couldn’t name the hole anything else. This little par 3 over the pond is a treat! 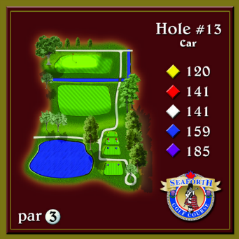 #13 – “CAR” – In keeping with our hockey/golf flavour Cam selected the name for this hole. Just like in road hockey when the game stops for an approaching car, the same is true on this tee. The serious player will mutter, “Car,” and start his routine all over again once the auto has passed by. This is a great par three with lots of tee choices and a great view of the perfect shot! 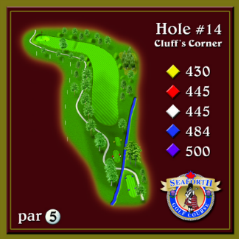 #14 – “CLUFF’S CORNER” – The land that these holes are built on was once a part of Scott Cluff’s farm. Ken & Rod Doig had long wanted to expand the course from its original nine hole layout and had asked Scott Cluff to let them know if he ever wanted to sell his farm. Scott said he would and true to his word the land exchanged hands in the 70’s allowing for the expansion of the golf course and the development of the original real estate lots. This dogleg left par five has a corner bunker and the green is also well protected by bunkers on the right. 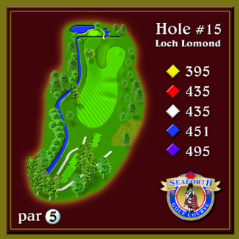 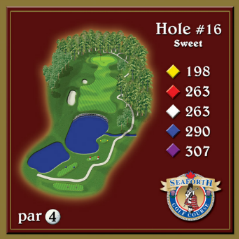 #16 – “SWEET” – This completely new hole is truly sweet sixteen. Many believe it will be our signature hole – a short par four over a large pond. The green is sheltered by trees on three sides and a bunker on the front right so you need to be straight on your approach – and don’t be long 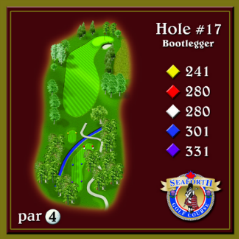 #17 – “BOOTLEGGER” – Long before golf courses were licensed under liquor laws that allowed golfers to enjoy the “spirit” of the game while playing, many golfers chose this far corner away from the clubhouse to relax and refresh themselves with a pint or two. It was at that time the old 7th green & 8th tee in this corner and during many a legion tournament that’s as far as some of the lads went. Stay left on this par four or the birch trees will eat you up 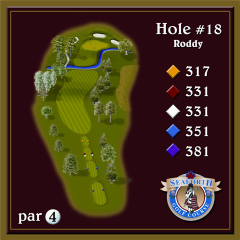 #18 – “RODDY” – Rod Doig was the Seaforth Golf Course’s keeper of the greens from before the first tiny grass seed was planted in 1959 until about 1995 when ill health made it impossible for Rod to continue. Rod handed the reigns to his nephew Todd but continued to assist with the golf course in other areas as he had always done especially when being keeper of the greens really meant keeper of the whole darned business! Rod was the penultimate traditional greens superintendent – we seldom saw him without his floppy hat and his hands were always battered and greasy. He always had a ready smile for the golfers and would often pull up on the tee and give a quick tip. Then he’d fish an old ball from his pocket & “borrowing” the member’s club would knock the ball down the fairway, hop on his cart, and head off to the next job. He is missed by all who knew him. The finishing hole is the second most difficult on the course and you have to get your tee shot well down and into the middle of the fairway to get a decent shot into the green.